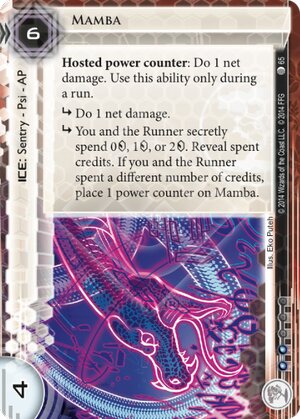 Hosted power counter: Do 1 net damage. Use this ability only during a run.

Mamba is a powerful tool in a flatline deck: it provides on-demand damage, it helps secure multiple servers, and its strength and type set it neatly in a "hole" for most breaker suites. Any rich Jinteki flatline deck should strongly consider this piece of ice.

In the Lunar Cycle, much thought was given to complete "sets" of cards. The most prominent example on the Corp side was the Grail ice--Galahad, Merlin, Lancelot, and Excalibur--but other sets were introduced as well. For example, the brilliant (and underplayed) "morph" ice from Weyland, or the set of "Constellation" ice: Taurus, Virgo, Sagittarius, and Gemini. So it seems fitting that this cycle finally gave Jinteki a "snake" ice to complement the other three: Uroboros, Viper, and Caduceus.

When evaluating ice in Jinteki, the typical wisdom trends towards making the runner spend s or cards in a single, massive batch to keep from losing via flatline. As experienced Jinteki players can tell you, setting this up is difficult. You need multiple pieces of ice sitting on valuable servers before their individual effects add up to a large "payment" from the runner.

This ice doesn't add appreciably to the cost in cards of running a server--if both subroutines fire, an initial instinct is to treat this as two net damage. But the power of the second subroutine is that the net damage can be used regardless of which server the runner is hitting.

If all ice is rezzed, this means that the runner has to assume that the "card cost" of any single server is increased by one for each counter on Mamba. This is deadly if a Komainu triggers. It's likely to bring them below three cards if the corporation has a few counters saved up--perfect if they're running on Snare!s. The flexibility of the power counter gives this card a huge strength.

Furthermore, this card is likely to catch runners off-guard. The strength is higher than Mimic, and using a Femme Fatale to bypass only gets them through one at a time. (And leaves a Komainu untouched.) These are the most commonly used killers--Faerie is a strong contender, but only works once, and as Jinteki, you need to be burning through those. In short, this card slips through the cracks of most conventional breaker suites.

That said, this power comes at a cost. 6 rez cost is nothing to sneeze at, and then you still need 2 to play the psi game. So an Emergency Shutdown is a good counter to this card--and something you might want to keep in mind before rezzing. Some AI breakers, such as Eater and Atman, make it through this card well enough, so you may need some anti-AI tools, such as Wraparound or Swordsman.

Perhaps one reason this card doesn't see as much play as it deserves is its uniqueness in the card pool. This card defies comparison. House of Knives replicates its ability, but only on an agenda score--a far different requirement than rezzing an ice and winning a psi game--and the one-per-run restriction doesn't exist for Mamba. Shinobi is similarly priced and around the same strength, but due to its bad publicity and trace, it's only really rezzed when the runner is about to die. Bullfrog and Snowflake both contain the psi mechanic and are pretty taxing, but don't directly contribute to killing the runner.

Perhaps the most potent comparison to rezzing a Mamba is scoring a House of Knives and rezzing a Lotus Field simultaneously. In both instances, you can do some damage, threaten to do more damage later, and present a problem that many runners can't easily deal with. Or, to compare this to an out-of-faction card, Ichi 1.0 is fairly similar, though it works in a different strategy entirely.

(Order and Chaos era)
hatman 174
I like the theme of the card: the first subroutine is its bite, and the second its poison. — Kroen 27 Feb 2015
I see some synergy with Helium 3 Deposit but very situational — Beyo 8 Nov 2015
Unfortunately now MKUltra has perfectly matching breaking ability for 3cr — NoxArt 29 Jan 2017
A year later, no it doesn't! — Oooer 30 Nov 2017