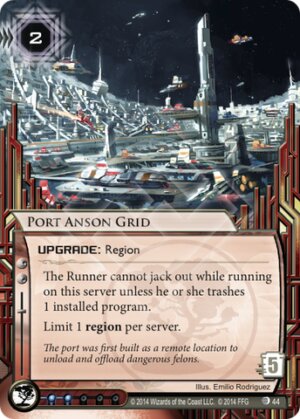 As an additional cost to jack out during a run on this server, the Runner must trash 1 installed program.

The port was first built as a remote location to unload and offload dangerous felons.
Illustrated by Emilio Rodriguez
Decklists with this card

Jinteki's upcoming identity in the Red Sand cycle ("AgInfusion", spoiled in the Worlds 2016 FFG stream) will be a good home for Port Anson.

Are you detecting a network intrusion from an unidentified off-world IP address? Route it to your signals team on the moon, backed up by the Sol system's most advanced analysis software to ensure that the unauthorized data signature is thoroughly scrubbed. Could some friendly experimental test facility be at the base of the server, keeping Port Anson company? Perhaps the Port is guarding an Archives full of cuddly lotus flowers, byproducts of your tireless efforts to feed the Martian colony? These are creative exercises for the reader.

RP couldn't make this work because as the existing review aptly states, with that ID the runner has always been able to choose the least of 3 possible evils to make their first run of their turn and get at your remote servers. J:AI will have a field day though, as the choice is in their hands to place the runner in the worst possible position. Do note that for maximum effect the outermost rezzed ICE on the server AI routes the runner to must be previously rezzed somehow as the ID causes a bypass of the 'approach' step.

At first glance this seems okay. Good rez to trash, annoying effect, fair influence. You dream of all the mean ice you can put in front of this and grin.

Then you start to notice the downsides. The runner gets to choose the trash. Any recursion makes it a minor annoyance rather than a game changer if it fires. The first jack-out window is after the first piece of ice, making this useless until the server is double iced. And how often do you jack out, anyway?

If you're playing against a Jinteki: Replicating Perfection, the answer is every turn you make a run. Suddenly the double ice requirement looks easy, and a minor annoyance is just fine if they have to run it over and over and over. And the runner that goes through all of your mean ice is going to have to spend 5 to trash it, which is good by itself, but when you consider that they likely couldn't also run a remote on the turn they did that, it just becomes absurd.

Suddenly this is sounding broken. All that wonderful stuff for a mere 2 credits? Here's the rub: it's not 2 credits. It's 6. Because you need one one every central. And you need them double iced. That's nine cards. Yes, you can still put mean ice in front of your centrals without it, and you should, but without three of these rezzed on centrals the runner still only has to deal with a single piece of ice to do a remote run. Suddenly 5 to trash isn't looking like such a bad deal.

Now RP games tend to run long anyway, so it's not unreasonable to think you will manage to get three of these out fairly often, but that's three card slots you're dedicating to something that is essentially useless unless all of them are out. I say essentially useless because even with two out the runner will just hit the third central's first ice if they want to hit a remote, and probably weren't going to jack out anyway if they were running one of the servers with it.

You despair! All this fun stuff is just too fragile. But wait, you think. Recursion! Of course! Jackson Howard, Interns, and can get it back for free; Crick and Architect are ice that can install it from a subroutine. Susanoo-No-Mikoto is effectively a replacement for one (or even 2) of these as well, though extremely conditional.

In short, it's interesting. Which should be obvious given I just wrote seven paragraphs about a card with one ability.

(Chrome City era)
schwal 12
I use Port As — Brainteki 1 Jul 2015
I use Port Anson as an alternative to Whirlpool when trying to initiate a Cell Portal/Komainu death loop, go through again or trash something. — Brainteki 1 Jul 2015
And it can work great on ambushes like Edge of World, instead of rezzing ICE you rez Port Anson and watch as the Runner suffers as they make their choice. — Brainteki 1 Jul 2015
I agree with most of this but the whole "you need 3, one for each central" point I find silly. Crick covers your Archives, and now you have two centrals. Make one of them ridiculous with Port Anson, and now all you need to do is beef up a single central. Hell, you can run Excalibur to shut down one of those, too. I tried Anson out when it was released. I found it tough to have my perfect central servers because you need very few ETRs. Tenma Line is probably fitting here. — TonyStellato 6 Jul 2015
Ignoring Archives for now, say you have a Port Anson on HQ but not R&D. Runner's first run is against R&D, they deal with one piece of ice then jack out. They are then free to run on whatever they actually wanted to. — schwal 12 Nov 2015
This'll be a pain for Nero Severn — Mechanoise 12 Feb 2016