Mother Goddess gains the subtypes of all other rezzed ice.

On the first day She breathed data into the void, and it hung suspended like jewelled stars. On the second day She spoke order into the data, and it flowed from rivulets into streams and from streams into mighty rivers. On the third day She gave independence to the order, and it ebbed and flowed according to its own accord. -The Cant of Helios
Neutral • Liiga Smilshkalne • Upstalk 10
All sets:
Links: Decklists | ANCUR 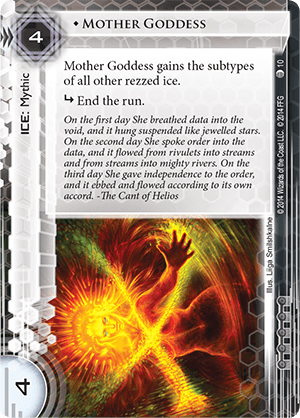 This is one of my favorite pieces of ICE. As your first piece of ICE rezzed, it doesn't get too much better for keeping the runner out. Obviously, you can't avoid rezzing other ICE throughout the game, but there are some very interesting interactions:

From a card interaction standpoint, it doesn't get much more interesting, ICE-wise. This is a fun, stong card.

(The Valley era)
mrdudesir 620
It's also an efficient rez-4-str-5-ETR-dont-click-me-Bioroid in HB:Stronger Together (with any other Bioroid already rezzed). — Hongkong Koma 16 Apr 2015
The problem with NEXT is this is unique, never giving you more than 1 extra NEXT ice. — Pikeman 24 Sep 2015
With Spark Agency it becomes more interesting. If there is a rezzed Advertisement ICE, Mother gains Advertisement too and Runner could loose 1 Credit. — Spammer 26 Jan 2016
2

Flagging an amusing if not completely practical interaction with Test Ground. Mother Goddess only counts rezzed ICE, so in an emergency one could use Test Ground to derez key ICE to remove key subtypes from her. This can even be performed mid-run! Of course this interaction should be used incidentally only, with the main purpose of Test Ground being to derez almost-exhausted economy assets, but sometimes it's worth giving up a lot for one turn of surprise lockout.

Also possesses minor synergy with Howler (the ICE Howler spits out gets derezzed afterwards) and can act as a stopgap behind a Bioroid Efficiency Research targeted Bioroid, provided other offending ICE do not exist yet (If the bioroid ICE is broken, it derezzes and Mother Goddess loses its subtypes). Combined with the NEXT ICE and Haas-Bioroid: Stronger Together synergies already mentioned, there's some potential for fun interactions in a few HB builds.

Running it with Chimera and the aforementioned Howler can provide a nice way to shut out a few early accesses while you get your glacier running. Howler even gets your glacier partly built as it does its work, without forcing you to give up on Mother Goddess's protection immediately. A good example of this is placing Mother Goddess on HQ or R&D, then Howler on either the other one or a remote. This provides one run's worth of regular ICE on the Howler server without compromising Goddess, as well as getting the ICE installed and ready to rez once you're ready to move into the full on glacier phase of the game.

And you don't have to sit it in front of a central, either. It costs 4 to rez which can be quite steep early game, but it's a good way to defend an early economy asset with a single ICE that will probably require more trouble than it's worth to get through just to get rid of an Adonis Campaign or something. Overall, a Haas-Bioroid deck with a number of these elements already baked in could potentially benefit from Mother Goddess.

(Data and Destiny era)
LordRandomness 217
This card is powerful out of Blue Sun too, since you can remove rezzed ice during the game to take types off Mother Goddess — KitsuAeryn 18 Jan 2016
That's true, but the other review already mentions that and I'm focusing on the Haas-Bioroid angle in this one. Still, good point! Blue Sun can also bounce out Goddess itself once it reaches a point of not being practical, as it tends to later in the game. — LordRandomness 18 Jan 2016