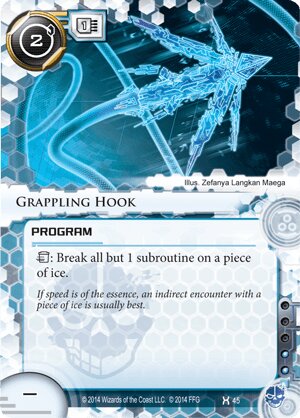 trash: Break all but 1 subroutine on a piece of ice.

If speed is of the essence, an indirect encounter with a piece of ice is usually best.
Illustrated by Zefanya Langkan Maega
Decklists with this card

Multi-subroutine taxing Ice getting you down? Make the Corp sad that they bothered to rez it.

• Only 2 Influence, so quite splashable.

• Not an icebreaker, so does not require strength match to interact with the Ice.

• Some multi-sub Ice has routines that you don't care about:

-- e.g. Inazuma if you plan to continue running anyway.

-- e.g. Komainu if you have a Net Shield installed.

• Not an icebreaker, so cannot be searched for with Special Order.

• The most glaring weakness is single subroutine ice, such as the rather popular Wraparound.

• Trashes itself to break the subroutines, so you need recursion to do it again.

• Some multi-subroutine Ice, esp. Barriers, you definitely do want to break all the subroutines rather than waste the Grappling Hook.

• Cheap, annoying multi-subroutines like Yagura or Pup just don't seem worth busting with this!

• Obviously e3 Feedback Implants can be used to break the last unbroken subroutine.

• A program that trashes itself can be a trigger for Exile's ability.

• Note that it does not combo with itself/another copy:

• If Quetzal doesn't have an e3 Feedback Implants down yet, this can fire first to break all but one Barrier subroutine, then her ability kicks in.

-- for the same reason paired 'Hooks don't work, timing Quetzal's ability with this is important against Barriers with 2 subroutines; if Quetzal fires first against, e.g. Eli 1.0, then the remaining unbroken subroutine is not a valid target for Grappling Hook.

Grappling hook probably still isn't a real card, but it's worth noting that it's been slowly growing in power as ice gets bigger, uglier and multi-subbier. The old combos with e3 Feedback Implants and the newer ones with Tracker are still as unwieldy as they ever were, but there's an increasing number of commonly played cards that are effectively mitigated by having a 'hook on the table. Fairchild 3.0, DNA Tracker, Chiyashi, and now Tithonium all have potentially game-winning facecheck penalties that Grappling Hook can reduce to a manageable level. That's added to its efficacy against old standards like Archer and Komainu. It's also hilarious against Little Engine, although that's unlikely to come up these days.

Grappling Hook has nice synergy with Mammon because you can facecheck ice with a single counter knowing that you have a viable breaking option on the table if needs be. It isn't an AI - it's not even an icebreaker - so it can even deal with the nasty subs on AI hate like Swordsman and Hortum.

God knows what you cut for it, but it's definitely better than it used to be.