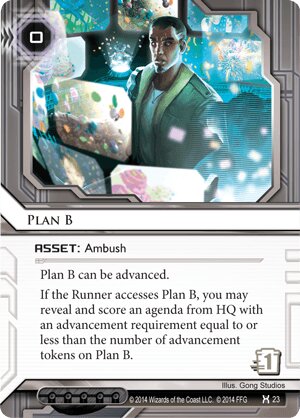 Plan B can be advanced.

If the Runner accesses Plan B, you may reveal and score an agenda from HQ with an advancement requirement equal to or less than the number of advancement tokens on Plan B.

It was once said that Plan B is unplayable without Mushin No Shin. Surely that was written before Matrix Analyzer hit the meta. Oh wait, that was core set...

Advancing Plan B during a run makes for a lot of fun. Puppet Master allows you to bump it once just before access. Three Matrix Analyzers on a Plan B, and you can score a 3-point agenda outright, if the runner doesn't chicken out. Watch as your piddling plan appreciates right before your eyes from something unplayable into something score-worthy. No credits needed to fire.

As others have said, Plan B is also quite useful in combination with Shell Corporation and Back Channels. All in all, this card is incredibly fun.

(Blood Money era)
Enochj 36
The problem with both Matrix Analyzer and Puppet Master is what you stated "if the runner doesn't chicken out." Most of the time if the runner sees you advancing a face-down card that they know they can reach, they're probably not going to access it unless they think it's a trick. — pulsemeat 8 Oct 2017
4

Plan B is basically unplayable without Mushin No Shin because there is not much point in using it to score any Agenda that only requires two advancements. Because of its dependence on Mushin and its lack of flatline potential it is not often used, even in trap based decks.

Plan B has a big advantage over all other advancable ambushes except for Ghost Branch:

I have personally used Plan B in a variety of decks ranging from shell game, NEH Horizontal Spam and even a Cerebral Imaging Mushin recursion novelty deck. It is fun to play and I've scored a surprising number of two-pointers with them.

However I'm writing this review solely to introduce a truly nasty jank combo:

For this combo any Agenda is fine, so IAA and scoring a Clone Retirement on access will trigger the goodness of Edge of World if you want to use it in a scoring server.

On that note if the Corp happens to be broke during access they can still Sponsor a Team of Fetal AIs to do 3 net damage if it will achieve the flatline! Shock! is free to trigger as well.

(Salsette Island era)
Zakalwe 472
I'm racking my brain trying to come up with a janky combo to use this with dedication ceremony, hoping that even with this face-up that the other card in the remote is enough of a lure. Well at the least you can dedicate the plan b, "televsing" that you have agendas in your hand, hoping the runner will run HQ and then you bombard him/her with nasty traps and other gribblies. — Siaphes 11 May 2016
Face up it doesn't have nearly as much impact as other Ambushes like Junebug or Overwriter. However if you want to monetise it you could try Expo Grid and multiple Shell Corporations? Unfortunately one costs 3 influence and the other one sucks post Political Operative. There is one jank possible (but not likely) Advance Plan B the appropriate amount, Offer you Can't Refuse > Bullfrog (Marcus Batty to land the sub?) and score Future Perfect or Vanity Project — Zakalwe 11 May 2016
plan b (on dedication ceremony) + shell Corp + ronin + a political asset + self-district, all the assets hosted by world plaza, protected by himitsu bako — Him 11 May 2016
Problem: The Runner can access the World Plaza first and trash it, which auto trashes ALL hosted cards without accessing them. — Zakalwe 12 May 2016
yes : my comment was for fun. but we Will not let the runner do: we Will self destruct first — Him 12 May 2016
About the team sponsorship, so, with the timing is that you can — valerian32 13 May 2016
About the team sponsorship, so, with the timing is that you can trash the card being accessed? Do you have window to do that before accesing the other cards? — valerian32 13 May 2016
Well actually I think Self-Destruct does not work as a Team Sponsorship install, because cards are Accessed in 4,5 and there is no window to Rez the Self-Destruct in 4.5. You can only use cards that work from facedown like Edge of World or Snare! — Zakalwe 14 May 2016
Hmmm... Self Destruct only does a max of 3 net damage and then Plan B doesn't work. I don't think this suggestion makes sense. — Zakalwe 14 May 2016
No flatline potential? Sure would be a pity if the Agenda scored from hand was House of Knives or Philotic Entanglement... — LordRandomness 7 Jun 2016
Unfortunately, I think the latest FAQ nullifies this combo. The runner only accesses the number of cards in the server at the point of initial access. I don't remember the exact wording but I think it prevents the runner from accessing the trap. — Murphy 29 Jul 2016
2

To be honest, this card is quite useless in most decks. Let's look at the ways you can play with Plan B.

1-Install, Advance, Here, you're hoping the runner will leave it alone, as there are no 1 cost agendas. You hope to double advance or triple advance on the next turn. The runner will strongly suspect this is some sort of trap or an awkwardly advanced 3-pointers since you do not score it. Most runners will check it when it has 1 token and not touch it if it's sitting with 3 or 4 tokens.

2-Install, Advance, Advance Runners might be tempted to run an under-protected or naked double advanced asset, but most often than not, they will assume it's a trap and leave it alone. If you then pump it to 3, 4 or 5, you will arouse even more suspicion. The bait will not work.

3-Mushin No Shin + Back Channels It's a viable option, but it involves a four card combo (Plan B, the 3/1 or 3/2 agenda, Mushin and Back Channels if they don't run it). In a Jinteki: Personal Evolution deck it could find it's place.

4-Plan B + Trick of light Again, why don't you play Junebug or some other trap like Cerebral Overwriter instead?

5-The Ultimate Bluff You're Weyland and you're pretending to pull off a Government Takeover. You have a three-pointers or a Vanity Project in hand a Back Channels if they don't take the bait at 6 advancements. NOW we're talking!

(The Universe of Tomorrow era)
Xh4rx4d 21
An Offer only works on centrals, so that isn't an option. Would make a fun GT attempt though... — LynxMegaCorp 8 Oct 2015
Or you use Mushin no shin on it and score something out of hand if they check it, and if they dont, you Back Channels yourself to have money for the rest of the game. — Chio 8 Oct 2015