"You won't feel it. Or anything else, for that matter."
Jinteki • Gong Studios • Honor and Profit 5
All sets:
Links: Decklists | ANCUR 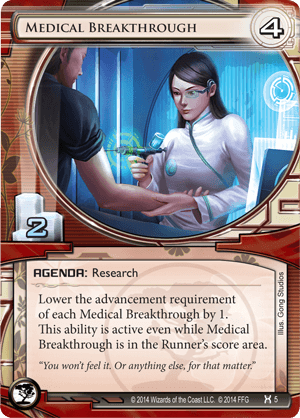 What could possibly be nefarious about a medical breakthrough that will help humanity in it's long struggle against parasites? Well what if it it's all hype but doesn't really work, or it's side effects are worse than the ailment it purports to cure? Yes, Jinteki would like to ride wave after wave of hype & soaring stock earnings on an otherwise worthless or potentially dangerous treatments so long as "independent study" fees to certain GFDA officials keep flowing the strategy should keep Jinteki in the black for another generation. Medical Breakthrough is a 4/2 agenda that helps make the next instance a 3/2 agenda and then the final only a 2/2 agenda. They hype will do it's work for Jinteki regarless of whether it is stolen and leaked to the public by the runner or advanced by Jinteki themselves.

Self-Ramping:: Medical Breakthrough is an agenda designed specifically to combo well with itself, each instance once scored (even if scored by the runner) makes the next 1-2 instances even easier to score

Fast Advance: There are dozens of ways to fast-advance instances of Medical Breakthrough, Tennin Institute: The Secrets Within is an example of an ID that help a fair bit here forcing the runner to be more aggressive perhaps even pushing the runner into traps he or she would rather avoid. Did I mention traps? If the runner is not taking the bait on Project Junebug then Trick of Light allows the corp to re-purpose those other-wise wasted advancements. Getting the runner to run into Space Camp perhaps even while sitting in archives can help the corp get instances of Medical Breakthrough advanced even faster.

That final point: Going all in on a Medical Breakthrough strategy, perhaps some 1 point agendas like Clone Retirement, House of Knives, Genetic Resequencing, might fit the bill to provide that final point!

Show me the money: All that agenda advancing can get rather expensive a critical part of any effective corporate strategy is to maintain some cash in reserve for rezing ice springing traps (Snare! anyone?) etc. Recurring income from Mental Health Clinic or PAD Campaign and so on can go a long way towards assisting a fast-advance strategy.

Steal-me depending on game-state Medical Breakthrough may actually be an agenda the corp wants to be stolen, or at very least in many cases the pain of having it be stolen is lessened by the fact that now the next two instances will be 1 advancement cheaper to score

Efficient 2 Points: Considering the total cost to score three copies of Medical Breakthrough it will cost the corp 3 to install, 9 & 9 to advance, this puts it on par with Braintrust, Merger, Philotic Entanglement at a ratio of 2 & 1 /1 agenda point. (Note: 5/3 agendas are .4 more efficient but obviously harder to score and higher risk when stolen)

2 Points is still 2 points: Losing one Medical Breakthrough may not end the game if it is stolen early, however a lucky Legwork or The Maker's Eye for example could make any previously freely given-away 2 point agendas a very bad gamble in hindsight.

Fast-advance decks can be fun and Medical Breakthrough is a very viable tool for Jinteki players. So if profit is more important than humanity's greater good this agenda may be just what your looking for. Don't look just to Jinteki, this agenda is alive and well in the world outside of Android Netrunner too.