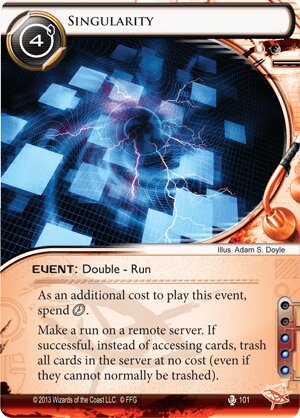 Run a remote server. If successful, instead of accessing cards, trash all cards installed in that server.

Like blowing everything up? If the Corp has lots of eggs in the one basket, this is the go.

• You don't access the card(s) being detonated, so you don't fear Ambushes.

• Great for taking out an entire server's installation against decks that like to stack multiple Upgrades (Caprice/Ash, anyone?)

• Can trash Agenda as well as defensive Upgrades, making you immune to Punitive Counterstrike (and avoiding NAPD Contract's tax until you can afford it, Jackson willing).

• Double, and cost 4 credits, so you do not want this run to fail.

• Remotes only, so this cannot remove a ton of Upgrades from HQ, R&D or Archives.

• "in" the server, so ice protecting the server stays.

• the run still has to be successful, so if Caprice fires, it's a very costly non-event.

• Somewhat anti-combos with Queen's Gambit - gain 6 for 2 clicks, spend 4 for 3 & 4 to run and blow up the free advancement tokens (and everything else in the server).

(Up and Over era)
ODie 715
It can certainly be effective if the corp mushins a card and you can't afford to run into a trap but also can't afford to let them score either. Usually the server will be unprotected so it will work. Of course for that purpose, Exploratory Romp works better. The only time I include this card in a deck is if I am using Eater as my primary breaker. If I can't access the agenda, I'll just blow the server up. But it is super costly. — quailman2101 16 Dec 2015
I've used 1x Singularity in Ken before: tutoring with Planned Assault (still only takes 2 clicks, not 3) and reducing the play cost with Public Terminal and Ken's ID. It can help with the Naked Advanced Jinteki Asset, the IG Expensive Must-Trash card, and the Ash-Adonis-Breaker Bay Grid server. Unfotunately, Caprice is a no-go bc it's not with the risk of losing the Psi game. Still, it's hard to slot because of the cost. — PureFlight 27 Jul 2016