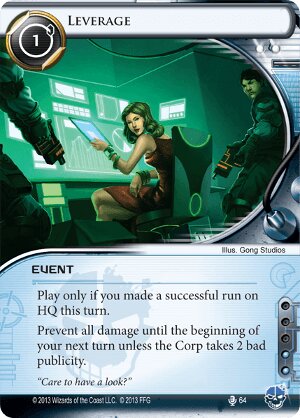 Prevent all damage until the beginning of your next turn unless the Corp takes 2 bad publicity.

"Care to have a look?"
Illustrated by Gong Studios
Decklists with this card

I'd like to offer a different perspective on this card:

Think of this card more like The Noble Path than like damage protection. If they don't take the BP hit then you can walk through Komainu, Checkpoint, Neural Katana, and even the monstrous Janus 1.0 without even having to do anything! Assuming you have a competent breaker suite it essentially offers the Corp the choice of completely defanging these ICE and more for a single turn, or permanently weakening the tax they provide (since you can use your BP credits to help you break the ICE). This can become a Catch-22 if the two bad publicity is enough to tip you over into being able to access a given server twice more this turn.

The secondary benefit of the Corp being unable to kill you next turn is nice, but in most situations they'll take the bad pub in order to win the game. The notable exceptions are if you can use the two bad pub to get into servers and win the game on YOUR turn, or if their kill plan involves trashing all your protection with The All-Seeing I.

Finally, in addition to ICE it also defangs several traps. Project Junebug, Snare!, Cerebral Overwriter, and others become safe to check and dispose of, and a trip into a Shock!ed up Archives becomes safe. This will probably just encourage the Corp to take the bad publicity...but 1 credit for 2 bad publicity is an amazing deal anyway!

In summary, this card is a strong counter to ICE that deters through damage since it either gives you an open pass through them for a turn or gives you a permanent advantage in breaking them. Not to mention that if they take the bad pub there's no rule against playing a second one right after...

P.S. this is especially great because as a Criminal you're essentially saying "I'm going to walk into this server now. You're not going to stop me if you know what's good for you."

(Martial Law era)
LordRandomness 227
Oh my, I'm suddenly getting all kinds of ideas about how to slot this into my Silhouette Blackmail deck. If agendas are backing up in hand use this, if they take the bad pub then you're set up really well against any scoring remotes. Great review, and nice idea on the flavour! Hadn't thought about it that way before. — Tirranek 8 Dec 2016
3

Arguably useful in hosing specific cards out of O&C, like Argus Security: Protection Guaranteed and Checkpoint, making it a possible niche pick for protection in criminal decks that already want to hammer HQ. Maybe.

With the rise of cybernetic cards that damage you on install, this may yet see play in some manner, such as preventing all damage (or getting free money for all future runs) preceeding a Mass Install of self-damaging cards, or other preventable damage-sources. It's not great, but it might be workable.

(Order and Chaos era)
Enzayne 25
Once Chrome City comes out, you'd be much better off playing Chrome Parlor for cybernetics. Same cost, in Anarch, and 1 influence besides. Prevents ALL damage, unconditionally, and is a resource instead of an event so it lasts across turns. — EnderA 7 May 2015
1

I believe the idea behind this card is to stop you flat lining, now considering your not going to play this every turn (Because you simply can't) and it doesn't install and have a passive ability, this means your going to need to pick your opportune time to play it pretty damn well. So what is the correct time to play it?

Now Picture this, You just Legworked into the corps hand Second click and took a 3 point (Hades Shard) and a 2 pointer (Project Atlas) the other card you revealed is a Punitive counter strike (and you believe they have another one) the corp has 11 Credits in their pool, and you have four. Do you play it?

The Answer is no, if you play it now the corp simply takes the bad pub and then kills you on their turn, so it doesn't work here (Arguably you could have different amounts of money in this situation but I don't think it matters as they are going to take bad pub every time if they are sure of the kill)

Equally if the corp is playing scorched earth and are sure of the kill they can just take bad pub and kill you.

So it doesn't work against the Meat damage finishers.

So why would you play this?

I think the best way to play this card is to lower the risk of being flatlined while checking traps or doing a large amount of Multi-access. For example a Jinteki deck (Doesn't matter if its Pe or not) has several external servers installed, some of them have advancement tokens on them, so you play "Leverage" Jinteki declines to take the BP (As they are unsure of the kill, you could just as easily access their installed Jackson Howard or something non-lethal) and you check them all, with no fear of getting a single scratch. But lets say they take the bad pub, Bad pub is a massive hit against Jinteki as it means many of their assets are easily trashed lowering the taxing effects. But I doubt is worth including any more than one of these cards in a criminal deck.

But In the FutureSpoilers*** Cybernetics (A new type of card to be released in San-san cycle datapack Chrome City) require that you take a certain amount of damage (Net/brain/meat depending on the card) in order to install them, once these are released it may be possible to play this and then quickly install them all.

Overall I think this card is defiantly and acquired taste, and a one off if at all put in the deck, while it may screw with the corps game plan it gives them an option to negates its effects entirely depending on the board state.

(The Valley era)
Dread Sovereign 295
Once Chrome City comes out, this will be clearly inferior to Chrome Parlor for Cybernetics. Ideally if you're playing just to prevent Jinteki trap damage, you'd go for Deus X (against bursts of damage) or Net Shield (against repeated damage) for a more robust solution, but they cost a memory slot, so they're not strictly better. — EnderA 7 May 2015
1

The main reason you would want to use this is to prevent being blown out after having taken tags, etc. Triple Scorched Earth for example. Unfortunately, if they're capable of doing that, they'll just take the bad publicity, which makes it rather useless as protection.

Alternatively, you might be seeking to give them bad publicity. Unfortunately, they can just choose not to damage you until their next turn. How much will that really save you?

So then you might be thinking... perhaps if I forced them to make a choice before I make a move, I could either run without risking taking damage, or get a free 2 bad publicity out of it. Unfortunately, it also requires you to have already made a successful run on HQ the same turn. So it's only useful when making a run on HQ is easy, but you are afraid of trying something else. You're relying on HQ being an easy target. And all for (at best) 2 bad publicity.

(The Source era)
EnderA 482
Criminals have Sneakdoor Beta for that. Question: the corp has to decide what's it gonna be, when the runner plays the card... right? — Crashdown 23 Apr 2015
Correct. However, if you have Sneakdoor Beta in play, they'll start icing archives appropriately. If you try to play Sneakdoor in the same turn as Leverage, you'll only have 1 click to take advantage of it. (1st click Sneakdoor, 2nd click run w/ Sneakdoor, 3rd click Leverage.) — EnderA 7 May 2015