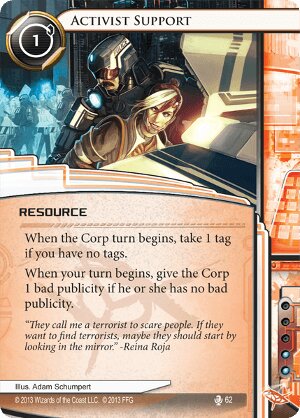 When the Corp turn begins, take 1 tag if you have no tags.

"They call me a terrorist to scare people. If they want to find terrorists, maybe they should start by looking in the mirror." -Reina Roja
Illustrated by Adam Schumpert
Links: Decklists | ANCUR

Activist Support attempts to put a lot of attention upon a badly behaving corporation, such efforts make the activists stand out more possibly gaining the attention of the corp. With the give & take that Activist Support offers first to the corp (unless the runner can avoid the tag) it could potentially be a significant financial boon to the runner offering up to a possible 4s per turn (bad publicity produces 1 to be spent during a run, x4 = 4), while opening up the runner to the whatever the corp can do with the tags.

Tag-me & Tax the corp Reina Roja: Freedom Fighter is an example of an ID that could especially benefit from Activist Support. With her ability to tax the corp when rezzing ice along with perhaps Rook for even more tax etc a runner could run to make the corp poor install Activist Support and perhaps some other resources like Data Leak Reversal, Raymond Flint Joshua B. etc) then eat the tag and watch the corp struggle to recover, does the corp spend 2 for then trash a resource (if he chooses Activist Support? Great! (cost to runner? & 1) if Activist Support isn't trashed, well then bring on the bad publicity.

Tag-me-not: Alternatively if the runner is not prepared to pursue a tag-me strategy Decoy, Forger, New Angeles City Hall or Qianju PT can be used to keep the tag away so that Activist Support can confer it's benefit while it's negatives are negated.

Exploit: If the corp starts accruing bad publicity, Raymond Flint can do his business and Blackmail can now come out to play ( Investigative Journalism too but probably not)

It typically costs the corp more to Activist Support than the runner has invested in it.

If corp is prepared to take advantage of tags, the runner might be in for some trouble

Playing tag-me corporate tax agent can be fun but comes specifically at the risk of being flatlined or having some other tag-induced disaster befall the runner. Go tag-me or tag-me not, either-way Activist Support is an econ card that can fit into certain decks but certainly not all.

(Data and Destiny era)
chris_walker 643
You can also use #New Angeles City Hall to avoid receiving the tags & if you have #Ray Flint out, then you can access when the Corp takes the bad pub. — Legion1979 9 Dec 2015
Thanks Legion1979, I did actually include Ray Flint in the "Tag me tax" combo section. But I see it can be added to the "Exploit" section as well. New Angeles City Hall has been added to the "Tag Me Not" section — chris_walker 9 Dec 2015
I think you missed the part where if the corp already has Bad Publicity this wont give them any more. You mentioned for example under Pros that it will give you credits for each Bad Pub it manages to land but it can only ever land one. — Yziel 10 Dec 2015
I'm not getting the logic in 4 creds per turn per bad pub. The way that's phrased, that means 16 creds at turn. — slobad31 10 Dec 2015
Thanks Yziel & slobad31. I was indeed missing the phrase *if he or she has no bad publicity.* I included the math breakdown of how activist support provide a potential 4 credit per turn. — chris_walker 10 Dec 2015
Playing this card with Street Peddler (yes that's a difficult combo to pull off) can completely avoid you from gaining a tag. Just shave it off with Chop Bot or Aesop's Pawnshop, once the bad pub has landed. — VildNinja 17 Dec 2015
you can install this with Davinci at the end of the corps turn and then sell it to aesops too. davinci only needs one counter. — TKO 22 May 2016
Dr. Lovegood, you guys. — H0tl1ne 25 May 2016