Install a non-operation card from Archives or HQ, ignoring the install cost. 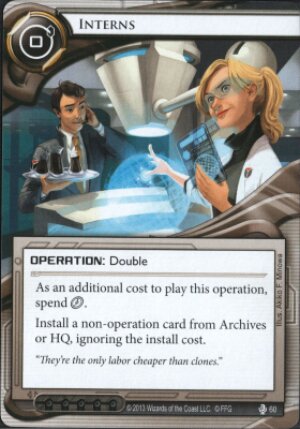 Save Credits, Pay with Time instead

From the White House to Wall Street Interns are a valuable asset to many organizations, often the trade off is providing time, training & sometimes some hand-holding in return for their services. Translated into Android Netrunner, Interns is a Double operation that allow some flexibility to the corp to recur & install a card or specifically save when installing yet more ice on already defended servers

Install from archives, saving all costs: The following cards allow the corp to install a card from archives ignoring costs (most notably for adding ice to an already defended server): Director Haas' Pet Project, License Acquisition, Team Sponsorship, Architect, Howler & Interns. While each of these have their own unique niche, Interns stands alone as being the easiest to use, as an operation itself, it's ready to fire without needing an agenda to be scored or waiting for the runner to do something.

Recursion Double operations Ad Blitz, Reclamation Order & Interns are each Double operations that offer recursion. Interns stand out from the other two in respect to it's ability to install cards ignoring all costs. (Interns also can be used for a wider array of targets when compared with Ad Blitz)

Other recursion: Jackson Howard, Archived Memories, Allele Repression, Crick, Project Vitruvius, Shannon Claire are all examples of other recursion methods, each of which offer unique strengths, Interns may at times be preferable in cases where it's flexibility offers the corp the option to use either it's savings (when installing additional ice) or for it's recursion ability when installing cards.

Recursion synergy: Used in combo with Jackson Howard (or some other recursion method) may allow the corp to recur one specific card and thereby reserve Jackson Howard for later when there are enough useful cards in Archives for the timing to make sense.

Recur or install ice: Installing yet more ice onto servers which already have ice on them can get increasingly more expensive, for Interns gets ice out there saving for other priorities. Recuring ice is particularly important if the corp is facing a runner using Parasite or other ice-trashing methods

Recur Assets & Upgrades: Increasingly upgrades such as Caprice Nisei o Ash 2X3ZB9CY etc or critical assets can become so threatening to the runner that the runner must target them. Using Interns to recur & re-install such an asset immediately after a runner went through considerable expense (perhaps getting through taxing ice) to it could potentially make the runner rather sad.

Recur Agendas: There may be times when an agenda gets sent to Archives where the corp would really prefer to be advancing it in a server. Interns provide one option to do so, however due to it's "Install a card" wording the corps options are a bit more limited when compared to other recursion methods.

Economy boost: Combined with Haas-Bioroid: Engineering the Future in addition to using Interns to get a card installed, bank a little cash.

Ice installation Savings: Potentially significant savings on installing yet another piece of ice onto a server.

Flexibility: Interns allows the corp to recur & install any install-able card from Archives or simply go for savings by installing ice out of HQ.

timing: cost cannot be broken up over multiple turns unlike with other recursion methods

Flexibility: Interns cannot recur Operations, and cards must be installed, not simply added to HQ

Interns sees some use in popular decks, notably as a Noise: Hacker Extraordinaire counter or to keep the pressure on the runner with assets. There are certainly other cards that can hit one aspect of what Interns dual abilities offer and many of them do so to greater affect, however if you need it's flexibility specifically rather than targeted power Interns does what it says.

(Data and Destiny era)
chris_walker 631
ETF allows you to make money, while installing for free. Can be nice, if you are broke and still need to build up your fort. Although, 1 coin for 2 clicks - not that great of a deal. — Shieldwall 9 Dec 2015
Interns are also great for saving a Caprice or Ash from Archives after the runner trashed it. I think these are some of the most popular targets. — bubbathegoat 9 Dec 2015
Thanks bubbathegoat, I've included Caprice and ash to the review. Thanks Shieldwall, Engineering the future has been added too. — chris_walker 10 Dec 2015