Play only if the Runner installed a resource during his or her last turn.

Trace [2]– If successful, add 1 installed resource to the top of the Runner's stack. If unsuccessful, take 1 bad publicity. 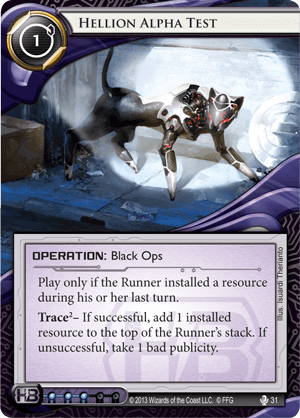 So this card has a low trace, gives you bad publicity if you fail the trace, and has a pretty crappy window of opportunity. Ugh, what a terrible card...unless you happen to get it early, and are playing a resource happy runner. I played this against a runner with the supplier, and I added 2 of these to my deck on a whim. It was magic. A hosted Kati Jones and Professional Contacts were busted up by this little card. The runner wasn't tagged, and it was the first turn of the game, it probably set me up for the win because the momentum he lost by losing those cards was pretty big.

Now, I'd imagine if he just played Kati, and I used it, he'd probably have more money, and would beat the trace if he could, so it would be more expensive to play, not worth the time, but if your deck has problems with things like Personal Workshop, or the supplier, or even any of the shards, this card will probably make you much happier. It's definitely niche, and not every deck will want to play it and the influence is high enough that this is only going into HB decks, but considering the lack of ways to tag someone effectively in HB, and considering how much money you can make in HB, you can at least leverage this card as a tempo changer.

At it's worst, it does nothing but protect your hand from hq accesses, and at best it totally screws up the runners game. No one really plays this card, no one is teching against it. First turn Andromeda might play all the economy in the world, but if she ends up taking a slow supplier turn, it would definitely be worth playing, and I believe more people should think about this card, and cards like it that are traditionally underplayed.

(Order and Chaos era)
cmcadvanced 25
Thing is, I can't think of a single thing that this does better than Snatch and Grab. S&G has no window, less cost, higher trace, a stronger effect, and lower drawback (the Runner takes a tag, vs you taking Bad Publicity). Oh, and yeah, I know this is any resource and that S&G is a "connection" but when was the last time the runner played a resource that wasn't a connection that was worth killing? Liberated Account? — vampire0 11 Feb 2015
Personal Workshop hosting something awesome? — michaeln 24 Mar 2015
Off-campus apartment? Bonus: The runner has to constantly install resources when using that card, so you can trash it any time after they add something new. — Lttlefoot 14 Aug 2015
6

I want to like this card. It seems okay at first glance. But then you start thinking...When would I use this over other cards? Why wouldn't I just tag the runner and trash their resources? The answer is: very rarely.

Hellion's weaknesses (as outlined by @cmcadvanced) are severe: restricted timing, uninstalling instead of trashing, not guaranteed uninstallation, risk of bad pub, high influence. The low trace means you have to have an economic advantage over the runner for this to stick. Really, the window to play this is after the runner installed a specific resource and made themselves poor. That's rough.

The strength of this card is its ability to target ANY type of resource. Compared to other similar abilities from Snatch and Grab, Contract Killer, and Elizabeth Mills, Hellion's flexibility gives it nice utility.

A similar effect would be an operation that tags the runner so you can just trash any resource with another click, such as SEA Source and Midseason Replacements. If you're including these cards, you're probably building a deck around tag-punishment for synergy. Hellion allows you to gain the removal benefit without needing to spend additional influence/deck space on tag-happy cards.

Kala Ghoda Real TV turns Hellion into a Trace 2 - Trash a Resource effect. I'm not confident there are many ways to get Resources out of the heap, so this could be a strong combo. Want to make a deck with Lizzie for Wyldside AND Contract Killer for Film Critic/ProCon/Beckman/Aesop's/Supplier? Maybe try Kala and Hellion instead!

There's a strange synergy with Underway Renovation. 1 Hellion, 2 Install UR, 3 Advance and trash. Pretty weak combo, but it exists, I guess.

There's a lot of resources that could be central to runner deck strategy. Some examples (that aren't connections) include:

Anything you target with Hellion cannot be saved by Fall Guy, either.

Overall, I don't think this card will be usable until there is more synergy with it, such as cards that add Runner cards to the top of their stack or trash the top cards of the stack. Or maybe if the runner cards listed above become prevalent and Hellion becomes a counter to those.

(Data and Destiny era)
PureFlight 1028
Adding to the top of the stack, instead of trashing, is actually a benefit in that it lets you dodge fall guy. — TheNameWasTaken 3 Jan 2016
I think the problem is that the main thing that installs a resource and makes the Runner poor is overcommitting. It should be plenty possible to punish that WITHOUT a specific tool to do so. Although it is notable that trashed resources can sometimes be recurred on the corp's turn, and that's basically impossible to do if you use this instead. — LordRandomness 7 Jan 2016
@TheNameWasTaken I didn't think about Fall Guy! I'll add that in. — PureFlight 17 Jan 2016
@LordRandomness Agreed - overcommitment by the runner is outside of the Corp's control, and better runners won't make that kind of choice often. Also, nice point on the resource recursion. What cards would let the runner reuse resources on the corp's turn? — PureFlight 17 Jan 2016