Whenever you make a successful run on R&D, place 1 virus counter on Chakana.

If there are at least 3 virus counters on Chakana, the advancement requirement of all agendas is increased by 1. 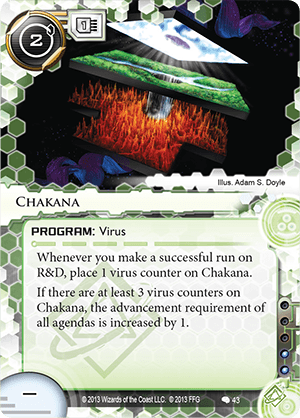 Chakana from Inca mythology also known as the Incan Cross symbolizes the three levels of existence. sky, ground & underworld. Translated as a virus for Android netrunner when fully loaded with 3 virus tokens Chakana can make the corps objective of scoring agendas fundamentally much more difficult.

Chakana can combo with up to 2 more copies of itself, with 3 fully loaded Chakana 3/X agendas will be as hard as Vanity Project to score. Djinn is a common program used to host 1-3 instances of Chakana and helps with tutoring them when needed too.

Getting Loaded up: Chakana doesn't do any good unless it's fully loaded, Surge can help especially after a purge, Grimoire can give a one-time boost (until purged). Hivemind (perhaps installed on Progenitor) along with Virus Breeding Ground are an insanely powerful combination that allow the runner to very quickly rebound from a purge.

As a virus itself each time Chakana is installed it can trigger abilities on cards like Noise: Hacker Extraordinaire.

Running on R&D with Medium also installed makes those doubly productive pushing the corp to loose to purge viruses sooner and more often.

(Any other obvious combos I'm missing? please let me know in the comments below and I may be persuaded to add them)

Chakana just takes up space providing no benefit to the runner until after it's fully loaded so the threat of virus purge can interrupt the runners plans at most any time.

The cost can make it difficult to include in a runner's rig if s are tight.

See tyrellian's Can o whupass for a very popular demonstration of how Chakana can be used in a competitive virus deck. When fully loaded Chakana can put the fear into the corp and slows the corp down in two very important ways, agenda scoring & virus purging often giving catch-22 decisions to the corp that the runner always benefits from. It can stand alone if the runner is able to make repeated runs on R&D but it really shines when used with combos that get it loaded up quickly even after a purge.

Maybe not the most powerful two card/two click combo... but no Corp player will feel good sacrificing an entire turn to purge the virus counters off there. Even if they do, you are always free to run R&D again and load it back up. You do want to run R&D, right?

(System Core 2019 era)
alchemy207 2
Would love to see the pros/cons to running that combo vs running Clot. — BlackCherries 21 Jan 2019
@BlackCherries It taxes the corp outside of fast advance. For 1/3 and 2/4, it would cost the corp ~2.5 credits. Against 3/5 is where it really shines however. If the corp installs and double advances, triple advancing next turn would not score it; they would have to advance it again for another turn. This tells the runner that it is an agenda and makes the runner stealing it much more taxing due to more wasted advancement counters. 1 and 2 additional Chakanas make this a problem for 2/4 and 1/3 respectively. — Apex Predator 7 Dec 2019