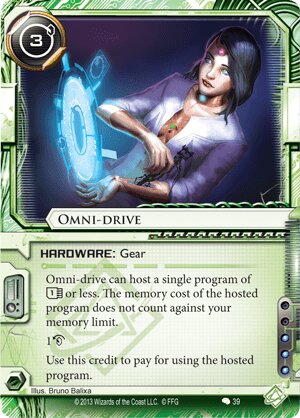 Omni-drive can host a single program of 1memory unit or less. The memory cost of the hosted program does not count against your memory limit.

Use this credit to pay for using the hosted program.

Illustrated by Bruno Balixa
Decklists with this card

This card, sadly, is not as good as it could be. While it will pay for itself if the hosted program is used 3 times, it requires to be built around. deck space is scarce. If you go down to 0 credits this hardware might be for you. Perhaps you are a follower of a certain world church. This card could easily be usable if it said stealth next to that "Gear".

(All That Remains era)
StLion 3
"Deck space is scarce" is actually the whole point of this card. I'm not saying it's good, but you shouldn't list the one thing it has going for it as the main thing it's missing. It squishes +memory and recurring econ into a single expensive card rather than 2 separate but cheaper cards. — Bigguyforyou518 4 Apr 2015
Well said, Big guy. That's one big reason I keep looking at that card in Replicator variants, where deck space is incredibly strained. The big problems are that like Dinosaurs it's awkward if drawn in the wrong order. That and it's doesn't play nicely with 2-mem, stealth, click-based or trash-based programs, and all those deck-building constraints begin to add up. — Glitch29 19 Jun 2015
Have it host a Net Shield and prevent net damage for free while you keep your memory for icebreakers and the likes of Magnum Opus. — Styx 26 Dec 2017