Make a run. If successful, instead of accessing cards, remove up to 3 advancement tokens from a single card in or protecting the attacked server. 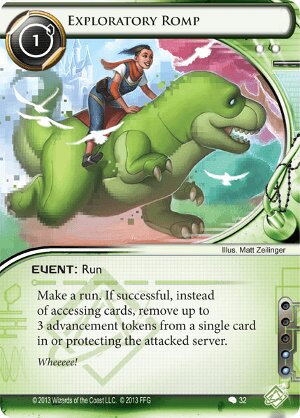 As of now, this isn't very useful. I experimented with it in a couple of tournaments, and really...everything this card can do, other cards do so much better.

Parasite and the cutlery Events (Forked, Spooned, Knifed) let you trash troublesome ice with advancement counters on them. Can't use Trick of Light if the ice doesn't exist!

If you can't steal an agenda right now (like NAPD Contract or something advanced after Utopia Fragment was scored), Imp lets you trash it. To make matters worse, upcoming card Film Critic will let you basically steal it for free. Plus, playing a Sure Gamble would give you the money to steal it anyway.

I had one case where this was useful during my last tournament; I used Crescentus to derez a Wormhole during an Exploratory Romp run and then removed the counters from Wormhole.

But how often can we live the dream?

(The Underway era)
WildM 287
There is one niche use of this--attacking advanced traps, e.g. Junebug/Overwriter, that are being used to protect a Shell Corporation. If they leave them unrezzed, you can still Drive By them, but if they rez it, this is your only recourse (unless I'm missing something). — Pikeman 14 Nov 2015
Sure there's another way! Overdraw/boost hand size and then access and trash it, suffering the full effects. — GrantZilla1979 3 Dec 2015
Singularity and Quest Complete both get you where you want to be. — daytodave 18 Feb 2016
Now with Builder of Nations out, this card is going to be useful. — CactusJack 19 Aug 2016