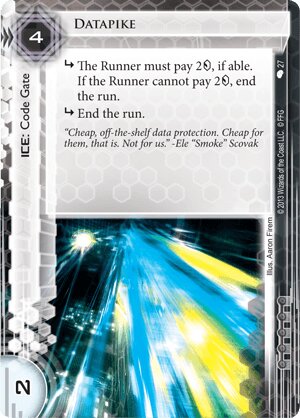 "Cheap, off-the-shelf data protection. Cheap for them, that is. Not for us." -Ele "Smoke" Scovak
Illustrated by Aaron Firem
Decklists with this card

This ICE is very similiar to Enigma, it is neutral, has a Strength of 2, one taxing subroutine and one End the run.

So it has the same weakness as Enigma that it does not cost Yog.0 anything to break it and the runner will probably only hit it once but does cost one credit more to rez, which can be huge in the first turn since it often is the difference being able to rez one or two ICE.

Datapikes tax subroutine on the other hand can be pretty good if it hits, having a similiar effect to Tollbooth and slowing the runner down in a bigger way than Enigma.

The problem with Datapike is that you need to play it in a deck with strong early game economy that does not have or gain bad publicity (since it negates the tax) which means the faction that would use it the most, which is Weyland, does not like it. For NBN and Jinteki it is often too expensive for its effect and HB has better code gate options to tax the runner.

If you ever play a Weyland deck without or little bad pub or a NBN (or maybe Jinteki) deck with above average early game burst economy were you would play Enigma than you should give Datapike a chance... in all other cases it struggles to much with its many restrictions.

(Chrome City era)
MrOshova 12
it's no that bad - without BP, early game Datapike is a huge tempo hit. Later, with or without BP it is still mildly taxing (barring Yog.0) piece of ICE. The further the — quiciuq 29 May 2015
...the farther the game, the relevance of ICE subroutines shifts from quality to quantity, and two subs is good anyway. — quiciuq 29 May 2015