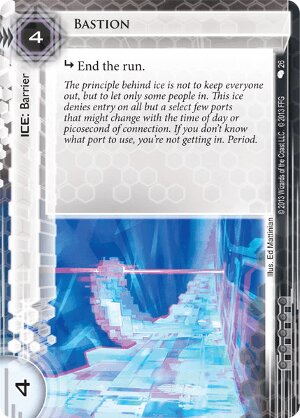 The principle behind ice is not to keep everyone out, but to let only some people in. This ice denies entry on all but a select few ports that might change with the time of day or picosecond of connection. If you don't know what port to use, you're not getting in. Period.
Illustrated by Ed Mattinian
Decklists with this card

It's impossible to review this card without comparing it to its little brother, Wall of Static. For 1 more, you get 1 extra strength, which at first glance seems like a fair, or even somewhat good, trade-off. However, under a more thorough analysis, I don't think it holds up.

Here's why. Both cards are, for all intents and purposes, trying to fulfill the same role. A cheap, quick defense against face-checking early remotes, or alternatively, an early hurdle for centrals that most runners can't leap over in the first few turns. However, at fulfilling that role, it does a worse job than the all too familiar Wall of Static, for one reason—economy.

Early on, money is tight for the corp, barring a first turn Hedge Fund. And even if you do get an early operation for money, unless you're playing NEXT Design: Guarding the Net, you'd usually rather spend your first few installing ice, or an early drip like PAD Campaign. The earlier you get your drips going, the more they can pay off over the course of the game. Additionally, leaving your centrals undefended for long is often disastrous.

And in these first few turns, which is the only time either of these walls has a chance to be relevant, 1 is a big deal. A very big deal. And 1 extra strength, in those first few turns, usually isn't. If you're forced to rez this on the runner's first turn, it's probably worse for you than it is for them. Your credit pool has likely shrunk so much that most other ice you have out can't be rezzed. You also have to keep an extra 1 on hand at the end of every turn just to have the option of rezzing Bastion.

This, of course, isn't even considering the fact that there are usually better options than Wall of Static too. Weyland has the excellent Ice Wall, Jinteki has Himitsu-Bako, HB has NEXT Bronze, and NBN has Wraparound, and Resistor is coming very soon. Bastion's higher strength usually won't matter much later on either, as it only costs a credit more to be broken by either Corroder or Cerberus "Lady" H1.

In summary, if you want early-game ice, use in-faction stuff first, then WoS or spend a few influence to splash another faction's if you need a few more. This does little more mid-game than other, similar ice, and if it has a place in a deck, I haven't found it yet.

(The Universe of Tomorrow era)
Pikeman 279
I've never really thought of Bastion strictly as an early game ice. I've always thought it was meant to be played in more taxing decks. 1 cred more to rez early on is certainly something to consider, but I think you brushed over the extra credit tax a little too quickly. Putting Bastion down on R&D for example, especially against Shaper, is likely going to cost many more credits over the course of a game than Wall of Static. With Corroder still being the king of Fracters, I think Bastion has its place in certain tax-heavy decks. — WayneMcPain 20 Sep 2015
It's not that the extra credit tax isn't going to add up over the course of the game. It's more that, for the rez cost, there's other ice I'd rather have. Things that come to mind that cost 4 credits are Data Raven, Markus 1.0, or Mother Goddess. And there's even cheaper ice I'd usually rather have, like Eli 1.0. Mostly I feel like by the time you're comfortable with the 4 rez cost, you'd rather have a different piece of ice out that can usually penalize the runner more. — Pikeman 21 Sep 2015
With [Blackstone](https://netrunnerdb.com/en/card/11068) coming in Intervention and general rise of Stealth this cycle we can expect Bastion being much more taxing than Wall Of Static — 3 extra creds (and one of those has to be stealth!) to break. — WildSam 11 Oct 2016
3

Bastion never sees play, and it's a shame because it's a good piece of ICE if you have no influence to sub for an Eli 1.0. As with other reviews, comparing it to Wall of Static, we have to remind ourselves that the 1 extra cost for the rez is a one-time payment, taxing the Runner 1 extra each turn to break. Bastion's biggest weakness however, is it's strength - the 4 strength Atman is still popular in today's play, and Bastion comfortably fits into that range. Bastion is a pretty respectably piece of ICE, but it's going to be sitting on shelves for a while.