When you score Director Haas' Pet Project, you may create a new remote server by installing up to 3 cards from HQ and/or Archives in that server and/or protecting that server (one at a time), ignoring all install costs. 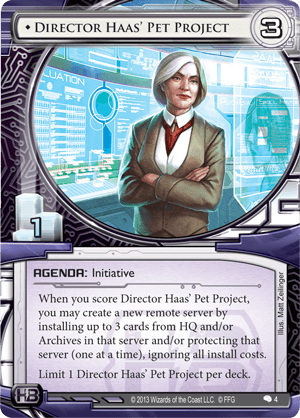 Many Haas-Bioroid: Engineering the Future decks focus on the appeal of fast-advance and tend to float the odd single-pointer agendas, and since HB's core identity is geared towards generating money Gila Hands Arcology is often ignored and replaced with Chronos Project. So if you're looking for the odd 1-pointer to slot into your deck, why would you chose Director Haas' Pet Project over Chronos Project?

The first thought is to recur the assets and/or upgrades you may have lost to the archives, namely Caprice Nisei, Ash 2X3ZB9CY, Adonis Campaign / Eve Campaign or Breaker Bay Grid.

An alternative thought is to consider how strong your meta is with Apocalypse. Typically your opponent's turn will be spent firing the Apocolypse, with the hopes to reap rewards on the next turn. Using Biotic Labor and Director Haas' Pet Project you can score out this agenda and recover a scoring remote before your opponent can establish a breaker suite; however, this will leave your centrals at the mercy of the Runner, but that's the trade-off.

So consider DHPP if you're in need of board-state acceleration / recovery; if you're shy of Team Sponsorships. Situational, but being able to effectively Interns an Ash, Caprice and Turing off of a single score can be powerful, and if you 'do' have all 3 Team Sponsorships rezed, it gets even better.

When Creation and Control first came out, this card seemed mediocre. However, with the release of "The Source," I feel that this has gone from just a decent agenda to a very good one. Why? Well, Self-destruct, of course! As others have pointed out, Self-destruct really more of a safety net or "escape pod" than anything, at least when considering the powerful executives.

Each deluxe expansion has featured a different 5-influence executive (Director Haas, Chairman Hiro, The Board, and Victoria Jenkins), all with the same caveat—if trashed while being accessed, they're a 2-point agenda as far as the runner is concerned. 'Trashed' is the key word here, as cards from archives cannot be trashed. So, Self-destruct neatly patches this hole, with an added bonus of potential net damage, but has its own problem—all the valuable ice you had protecting your even-more-valuable executive was trashed along with the executive, and the executive's safety net.

DHPP, on the other hand, turns that frown upside-down. Presuming that you're taking advantage of the in-faction Director Haas, her pet project has the ability to raise not only herself from the dead, but her safety net, and a piece of ice to protect them as well! And, if you've got lots of influence to spare, you could even throw in one of the other executives for additional fun.

But before we get ahead of ourselves, let's discuss the drawbacks of DHPP:

So, DHPP is by no means a silver bullet. But, I would hate to build a deck with Director Haas without Self-destruct (or something similar), and I'd loathe to include Self-destruct in a HB deck without a copy of DHPP also in the deck.

(The Universe of Tomorrow era)
Pikeman 265