Make a run on Archives. If successful, instead of accessing cards you may install a program from your heap, ignoring all costs. 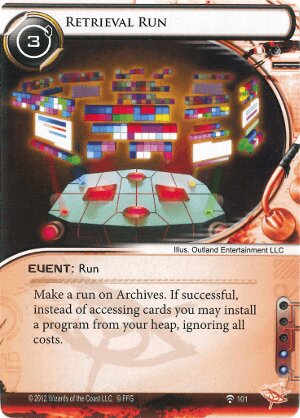 A solid and interesting bit of recursion, Retrieval Run may not have seen a lot of use but it is at least known as an understandable card. The main issue that it runs into is the three credit cost, and the possibility of ICE over archives increasing that cost even more. Given that Archives is very often a target of Anarch decks, that can limit when this card is useful. In addition, spending a click and three credits to install a card from the heap that may cost far less isn’t always the best economic idea.

Yet there are plenty of programs (mainly icebreakers) that cost far more than three, and this can be a smashingly good way to get them back into play if they were trashed. Combined with Inject it is even stronger - good card draw that is going to dump those expensive programs into the heap for the runner makes a strong case. Even for the now returning Yog.0 it is a discount to install, once it is in the heap, making Retrieval Run a worthwhile investment. Assuming of course, Archives isn’t too heavily ICE’d.

It is a solid card that has a few drawbacks that are entirely circumstantial, and can be worked around. Noise isn’t going to use it because of how fast Archives becomes ICE’d against him, but other runners can find it very useful.

(Chrome City era)
lynkfox 361
Its an almost essential pick for MaxX, and has done some excellent work for me. It also synergises well with Parasite. Unfortunately Crick has changed how many decks protect archives and not in a good way for this card; Crick firing to return Blacklist is particularly brutal. — WarpGhost 30 Jun 2015
1

Alternative combo could include Test Run and Scavenge: Play Test Run with Torch. Scavenge by trashing Torch, and finally Retrieval Run to get Torch back. This is 3 clicks and 6 credits to get two programs worth up to 18 credits in total.

I am not quite sure how the Test Run "if it is still installed" plays together with trash and reinstall? Worst case you'll have to play the combo over two turns.

(Data and Destiny era)
VildNinja 3
Test Run + (expensive program) + Scavenge works on its own. Trash Torch as the Scavenge additional cost, then it is in your heap and you can install it again with Scavenge effect. It doesn't leave the rig afterward, since installation from Scavenge overloads the one from Test Run. — Lupus Yonderboi 24 Jan 2016
With test run, femme, scavenge, and retrieval run in hand, you can test run for torch, scavenge torch for femme, and retrieval torch... or (with apologies for snark) for that matter you can just trust that your opponent will put ice 3 deep on R&D but be unable or unwilling to rez any of it so you can code siphon twice and then Lawyer up... cause that would also get programs installed cheaply but in a way that is unlikely to be successful on a regular basis. — Goldstep 25 Jan 2016