The rez cost of all ice is increased by 1.

And all should cry, Beware! Beware!
His flashing eyes, his floating hair!
Weave a circle round him thrice,
And close your eyes with holy dread,
For he on honey-dew hath fed,
And drunk the milk of Paradise.
-Samuel Taylor Coleridge
Anarch • Andrew Mar • Humanity's Shadow 82
All sets:
Links: Decklists | ANCUR 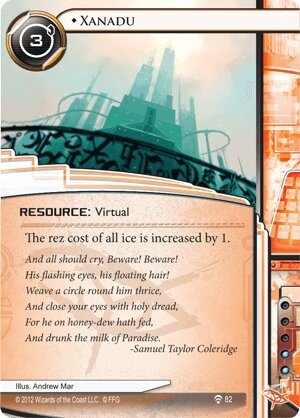 This should almost be an auto-include in a Nasir deck since it also gains you an extra credit when the corp rezzes ice during a run. That turns it into a good economy card as well as a corp denial card.

Xanadu makes the corp poorer for all ices rezzed. This, in turn create a credit differential in your favor. This can mean an ice which cannot be rezzed, an agenda not advanced, or making traces more difficult to pull off by the corp. Econ warfare is a real thing.

Since it is virtual, it can be used by Apex and can be a target for Gachapon.

But, if you do not gear your deck for econ warfare, at 3 creds to install, it is a price a bit steep for what it does. Ideally, you would like to use it early. But early, you will be a bit poor and struggling for cred to install your breakers and be able to run. Making it difficult to install early.

At 2 influences, this card can (and should) be used most often with Criminals, who have very good econ warfare tools. It will be seen most often with Reina Roja with Anarch, enhancing the ID ability further.

Art and text are great! I love the poem. Now, what is the relation with the card effect?