Play only if you placed at least 1 virus counter on a program this turn.

Place 2 virus counters on that program.

You must yell "surge" to get the full effect.
Anarch • Andrew Mar • Humanity's Shadow 81
All sets:
Links: Decklists | ANCUR 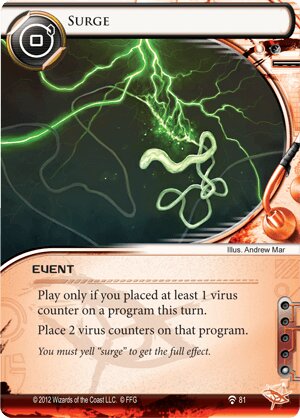 This card is insanely powerful and flexible in any virus wielding deck. 1 click and 0 creds for 2 virus counters? That's nuts. It's kind of crazy that it doesn't see more use. Don't believe me? Prepare to be SURGED.

Parasite taking too long to kill those pesky Tollbooths? SURGE IT! If it doesn't kill it out right, it's at least Yoggable the turn after you Parasite it. Or, just outright kill any <=3 str ice. That's value, mofo.

Playing Noiseshop and want to make insane amounts of money fast? Lay down a Cache and then SURGE IT! That's 2 clicks for 5 credits. Nearly a Queen's Gambit without the gambit!

Speaking of Noise, how about Gravedigger? One measly asset trash and you can mill 3 cards off the top of R&D! Not to mention the one you milled by installing Gravedigger.

Medium/Nerve Agent taking too long to get scary? Don't give them time to ICE up! SURGE THE SHIT OUT IT! One run and a Surge and your next run accesses 4 cards!

Sick of your Imps running dry too fast? Don't waste a Clone Chip! Just SURGE IT! Now you have double the Imp for only half the price!

Wanna slow the Corp down and force a purge? Throw down a Chakana, run R&D and then SURGE!! Watch them cry as their Astrotrains go flying off the rails.

Feeling really batshit crazy? Why don't you finally make that Deep Thought deck you always wanted and SURGIFICATE IT!!! Scope out R&D and snipe them Agendas.

Don't even get me started on Hivemind...

The worst thing you can say about Surge is that it takes up 3 deck slots. But you don't really care do you? No. You don't.

Get out there and SURGE.

(Old Hollywood era)
WayneMcPain 411
If you have a Grimoire, you can just SURGE any of those viruses immediately upon installing them — Bigguyforyou518 27 Aug 2015
Then you can SURGE the SURGED viruses for maximum SURGAGE. UNGGH — WayneMcPain 27 Aug 2015
It's certainly fun and versatile, but I'd draw the line a little way before 'insanely powerful'. Certainly the three deck slots it takes up are an immensely valuable resource that could probably be better employed. — Greasythumb 28 Aug 2015
I dunno if the caps clued you in, but there is a certain amount of hyperbole included with this review. :V — LordRandomness 21 Jan 2016
as a new player sometimes it is hard to tell with these reviews. — Tzyx 22 Mar 2016
How does this work if you have multiple programs that received virus tokens and several of the same program? What is "that program" as far as the target of Surge? — McV0id 3 May 2016
I've never had so much laughter SURGING!!!! through me at a review in my life! :) — StarlightCrusade 17 Oct 2016
10

A great way to get Darwin back into the fray after a corp purge. They usually set up a turn they're going to purge, and expect not to have to defend their servers for a couple of turns. This allows 2 more counters to get Darwin back up to 3 strength, more if you're playing Ice Carver/Personal Touches.