When your turn begins, gain 1credit if you have at least 2link.

"My boss rewards quality work. If you know what's good for you, you'll keep it up."
Neutral • Nate Stefan • A Study in Static 69
All sets:
Links: Decklists | ANCUR 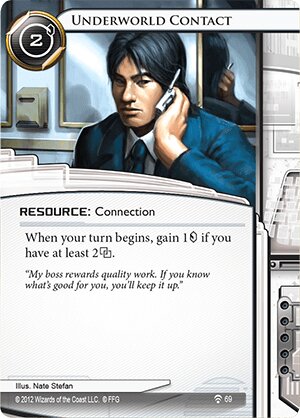 This card is best used with Runners that begin with 1 and are utilizing -boosting cards such as Access to Globalsec, The Helpful AI, Borrowed Satellite, Dyson Mem Chip or even Rabbit Hole. Prime candidates (in my opinion) are Andromeda: Dispossessed Ristie, who has a better chance of installing the necessary cards early on and Kate "Mac" McCaffrey: Digital Tinker, who can install Dyson / RH for 1 cheaper. Nasir (and Shapers in general) should have the best chance of utilizing UC efficiently, since THA, RH and BS are Shaper, and they have access to The Toolbox, which turns on UC without support. Another honorable mention includes Iain Stirling: Retired Spook, who beings with 1 and has an ability that supports passive economy.

(Chrome City era)
LynxMegaCorp 1336
Predict this will become a staple economy for Sunny LeBeau, link 2 at start. — dherki 15 Jun 2015
It'll definitely be the most viable for her. I didn't mention her solely because she's not released yet. The only trouble would be getting this early on. It'll be there if its there; otherwise, too bad. I doubt she wants to spend influence and money on #Hostage (though in a connection-based deck, maybe). — LynxMegaCorp 16 Jun 2015
Rabbit Hole is another under-utilized shaper trick for getting absurd amounts of link very quickly. — tiedyedvortex 16 Jun 2015
No mention of Iain? He loves playing this card though I suppose he's not the most popular runner. — SPHNX 16 Jun 2015
In my opinion, the biggest user of this now is 'Armand "Geist" Walker: Tech Lord', who runs tons of cloud breakers, requiring 2 link for that. Forger is typically used in tandem. — EnderA 15 Aug 2015
"I never really learned how to hold a mobile! I'm just improvising!" — Intergalactic President Superstar McAwesomeville 6 Jan 2017