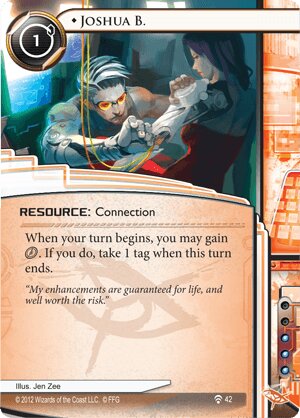 When your turn begins, you may gain click. If you do, take 1 tag when this turn ends.

"My enhancements are guaranteed for life, and well worth the risk."
Illustrated by Jen Zee
Decklists with this card

A dangerous, cheap card with a very useful ability. For the price of 1 the runner can use 5 clicks a turn! The tags you accrue, though, dictate what decks this card can be used against. Don't even consider it against Weyland unless you've got Plascrete Carapace and plenty of card drawing power. NBN loves a tagged runner so they can Psychographics or boost an Information Overload to board-clearing strength. Jinteki and HB should be okay overall.

This card works well with Wanton Destruction, Data Leak Reversal, and Activist Support. However, being tagged means that all resources are susceptible to being trashed, so if you use this, have multiples. It lacks in synergy right now, but the power of this card should not be overlooked.

(Order and Chaos era)
Steamwood 283
Use the Fall Guy, Luke :) — lajcik 28 Feb 2015
or NACH. Decoy if your plan is to keep it only for a short period, though that is debateable. Crash space can be included as another form of meat damage prevention, but meat damage isn't the only way you'll get punished as mentioned in the review (it does provide credits to get rid of tags later if the game goes that way - but then theoretically the Joshua B clicks aren't gained so much as brought forward) — zithith 3 Mar 2015
I imagine the purpose is to fully power up a Stimhack for one last big run. — fetish 11 Oct 2015