If Fetal AI is accessed from R&D, the Runner must reveal it.

As an additional cost to steal Fetal AI, the Runner must pay 2credit. 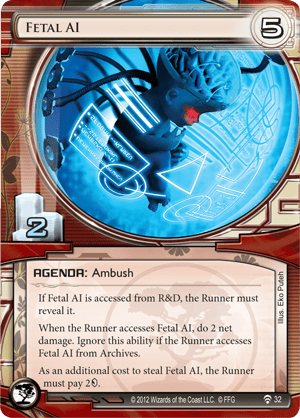 This is a solid agenda, though not one you necessarily plan on scoring. Basically, it lets you get more trap density in your deck by simultaneously counting towards minimum agenda points. The 5/2 ratio is awful, but it makes the chance of surprise flatline that much greater, and even if they're able to steal it, it's yet another drain on their resources. The scenario in which they encounter and can't pay 2 is a nice bonus also, but not that likely to happen these days.

A five for two is an unusual agenda cost, and because of that it doesn’t see as much play. Not only is it difficult to score, but unlike a five for three, it doesn’t reduce the number of agendas in a deck as well. It has two difficult drawbacks because of that. Yet it still sees a lot of play.

This is simply because of the fact it protects itself. It bites back when accessed, and if the runner doesn’t have the credits to steal it, it stays there. It is used with other agendas like it that protect themselves, and creates a difficult situation for the runner. Not only is damage a threat, but a number of credits has to be kept on hand ‘just in case’ during every run which might encounter these kinds of agendas.

While Fetal AI hasn’t seen as much use out of the currently powerful Jinteki: Replicating Perfection, it still is a common agenda that has been a staple part of many Jinteki plans at world domination.