Play only if you scored an agenda this turn. 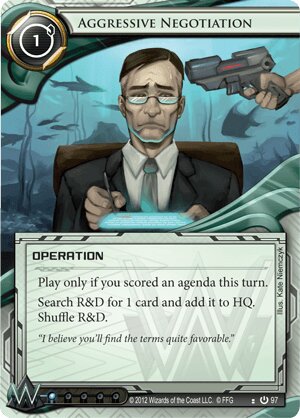 A tutor card is a tutor card, and it is a little surprising that this isn’t seen more. There is a little surprise that this was never in an AstroScript Pilot Program train deck, but that may be because influence was too tight, and lets face it - Fast Track is just better for that purpose. The requirement to score an agenda first makes Aggressive Negotiation harder to use - not only does the corp have to score something, but they have to have the card in hand at that same time. Predicting scoring windows is not that easy to do, and who knows what RD is going to hand up.

However, unlike Fast Track it doesn’t have to be revealed, and it doesn’t have to be an agenda. Need that last bit of kill for the combo? Or whatever other card is in that crazyness? This can find it. It is also in faction with Project Atlas, which while a bit harder to get off, can do the same thing - without the click. That fact that not only does an agenda need to be scored but a free click has to be left to use this card is what has really hampered Aggressive Negotiation from getting play.

Still, in a cambridge style deck (Jinteki: Personal Evolutionn or even Argus Security: Protection Guaranteed) there may be a place for it.