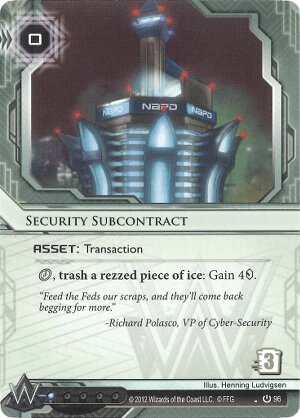 Lets explore the economics in detail:

NOTE: I assume that 1 card is worth a to draw, even though the corp might have received it from the mandatory draw. This is because tempo matters and both players need 'win' cards that get them closer to winning the game, whether it is Agendas, flatline combo cards, Icebreakers or run events. Playing a Hedge Fund spending a card and for 4 only gives an efficiency of 2/ because the corp still needs to draw a card directly helps to 'win' the game.

It costs to draw and a second to install Security Subcontract. It also costs to draw and install each piece of ICE, not counting s spent on installation and rez costs. It then costs another to trash the ICE. So assuming 0 were spent installing and rezzing the ICE, then it costs to gain 4, an efficiency of 1.33 not counting the cost to draw and install Security Subcontract. If you count those costs then it actually cost to gain 4 for an efficiency of 0.8, which is clearly worse than just clicking for credits in the first place. After trashing 2 pieces of ICE the corp will break even, having spent 8 s for 8 s. After trashing 3 pieces of ICE the corp has spent 11 s for 12 s, finally turning a 'profit'. To put things into perspective, those 11 s represent almost 3 entire corp turns. In the meanwhile the runner has probably installed some breakers, a Medium or R&D Interface and scored at least one Agenda from runs.

Now in order to get a free ICE install the corp will either install on servers with no ICE (so probably not containing anything valuable) or have a scored Eden Fragment which is a unique 5/3 Agenda. In order to rez this ICE you will probably want to use the in faction Executive Boot Camp (a good card) which even gives you a 1 discount. Lastly you will need to fill your deck with cheap ice like Pop-up Window, Ice Wall, Quandary and Hunter and then add more 'normal' ice so you can actually protect your servers.

The worst thing about security subcontract is the question of timing. It most likely comes into play when you are either really broke or need to have more s than the runner. In both cases it eats up valuable s on the turn when you probably need to spend your actions on installing things or SEA-Scorching your opponent. If it was similar to Aesop's Pawnshop and didn't cost a per use it would be barely usable, as it currently stands using Security Subcontract is worse than clicking for credits. The only 'beneficial' use for this card is tricking inexperienced Whizzard players into wasting a to trash it.

(Democracy and Dogma era)
Zakalwe 469
I think the best use for this one is to value cheap gear-check ICE once they become useless, like an Enigma when Yog.0 hit the table. Not that makes it a good card, though. — Lupus Yonderboi 21 Apr 2016
This ignores that the clicks andd credits spent on installing and rezzing ICE are not ONLY going towards earning from the subcontract. While the ICE is installed and rezzed, it should ideally be doing things for you to earn the two clicks you spent on it. Subcontract is only even potentially useful in decks where a lot of your ICE will be obsoleted over the course of the game. — LordRandomness 21 Apr 2016
could be janky fun/ a defense against ice trashing if it didn't require a click to tirgger :s — gamblingworld 22 Apr 2016
In fact here's my redesign- o rez cost, 2 trash cost, trash symbol- trash a rezzed piece of ice gain 4 credits. Now I still dont think thats quite playable compared with other options, but its closer... — gamblingworld 23 Apr 2016
@Lord Randomness - I don't think it ignores the value of cheap ICE. The problem is that the corp makes more profit just installing over the top of the cheap ICE (trashing it) and then playing Beanstalk Royalties, unless they trash 3+ pieces of ICE! — Zakalwe 25 Apr 2016
Well, for starters some decks actually want to do that and for those ones subcontract is a potentially useful one-of. The other thing is the possibility of NOT replacing ICE after selling it, which has two main applications: emergency funding (you're at 6 points, you trash all your centrals ICE to beef up your scoring remote, or you're getting Medium'd and you dismantle part of your HQ defense to safeguard R&D), or as part of a strategy that involves having a giant pile of credits suddenly. In that sense it functions as more of a panic button than a strategic include (you don't WANT to use it, but sometimes you're better off losing two ICE than the entire game). Although the fact that you have to set it up ahead of time kind of makes this impractical...bleh. I think I'm not really taking into account the two clicks it takes to set up an asset. This could really have benefited from the Advanced Assembly Lines clause that grants credits on rez, would have been flavorful too. — LordRandomness 25 Apr 2016
1

Another Weyland Core set card that has seen almost no use. Security Subcontract is a very interesting card that may see some use as new ICE such as Little Engine comes into play. ICE that is good for a while, then a huge drawback once the runner has the tools needed.

The main problem is that even if the ICE is not stopping the runner, its taxing them, even if that tax is only a credit or two. Once that ICE is rezzed it’s not costing the corp any money to keep it up, but it costs the runner every time they go through it. With ICE like Little Engine however, there comes a point where the runner is probably breaking even to get through it, making it not even worth as a tax. If there is more ICE like this that is worth playing, Security Subcontract could be worth a slot to at least get some of the money back. Of course, because the corp can just trash ICE whenever they install new ones on that server, which not only removes the problem, but also gets a new piece of ICE that may actually tax the runner, is usually a far better choice than a simple four credits.

(Chrome City era)
lynkfox 358
Probably worth mentioning the anti-synergy with Blue Sun. There's no point putting this in your deck, paying the install click and paying the usage click, when your ID will net you close to the same (or often more) credits for no clicks. — onehp 1 Jun 2015
Also worth mentioning that it's a transaction, but not an operation, so it doesn't do anything for BaBW. It's in a weird design space for sure. — FarCryFromHuman 1 Jun 2015
I think the interesting thing is that Security Subcontract seems to be designed for cards like Hive in mind, but Hive is the only card of that sort that exists — HurricaneRelic 2 Jun 2015
Cortex Lock is another similar to Hive, good in the first few of turns a bit useless soon after. — onehp 2 Jun 2015
Indeed - Hive, Little Engine, Cortex Lock - all these are ICE that might have a use to be sold to this card... but why include a card in an already tight deck for such a thing when those ICE can just be installed over instead, saving money on the install, adding a new element to the ICE on the table, an unknown element, and doing so in one click instead of two? (Selling to this card, then installing new ICE) — lynkfox 8 Jun 2015
Stuff like Paper Wall and Quandary can quickly become useless, and you gain more then their rez cost. Seems a lot like Data Dealer: — NobbyNobs 13 Jan 2016
Ice hosting a Caissa program, Parasite or that is the target of Femma Fatale are also possibilities. — Zakalwe 20 Mar 2016
1

I'm surprised Security Subcontract card doesn't see much play. Now yes, the cost of a piece of ICE is 2 clicks and its rez cost, which is a "bad trade" if you spend yet another click using Security Subcontract for 4 credits. But in late stages of the game, when you no longer need to guard your drip assets, you can decommission small taxing ICE for an unexpected burst of credits. If for instance you've been siphoned to 0, have a Beale/Psychographics in hand & a Security Subcontract in a remote, and you're sitting at 5 points, you would gladly trash any piece of ICE for the win.

The issue is that this use case is very narrow. It's a dead card if you draw it early, and you need to use it twice for it to be better than Beanstalk Royalties, which is generally considered a pretty weak economy card. It's best use is probably in decks that only pack ice as gear checks, and aren't trying to tax them once they find their breakers, but those decks are usually trying to go very fast, while this card is painfully slow.