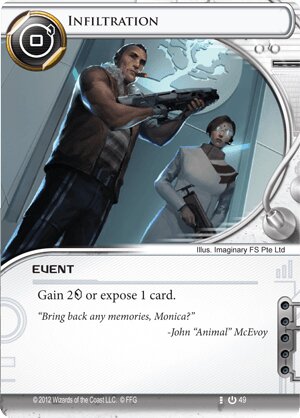 This card's existence and complete absence in play shows that Netrunner has come a long way in diversity. A strange card from the start, with a choice of two effects, neither fantasic. The 2 payout is on par with Armitage Codebusting in the base set, but only works once. Compared to any runner economy cards today, this has no place as a single use event for such a paltry gain.

The second effect, card exposure, has not seen much play outside of Criminal decks with Blackguard. Knowing what you are running for beforehand is a good effect, but it hasn't seen many cards since the effect is pretty quickly replaced by experience. Outside of Jinteki shell games, not much the corporation can do will require exposure to run on. After playing enough games on both sides, a runner can get a grasp for what cards should be in a corporation's deck, and depending on how well protected a server, should be able to estimate what type of card is installed.

The best method of card exposure is still a well-planned run. However, for when you just HAVE to know if the installed card is a Snare or a Future Perfect, remember that this card exists.

(Breaker Bay era)
Steamwood 300
**With the caveat that I'm /not/ a world-class player, and may be advancing the argument that this card is somewhat 'training-wheels-esque': — Shannon.L 21 May 2015
(added afterword, as I fail on the post button) - I find Infiltration is the single most game-enabling card I can play as a runner, so much so that it's found a home in a great number of decks. From my Valencia build that falls apart when it hits a trap to my Andromeda that needs to know if what's down there is worth running before wasting the clicks... let's just say that I can find no fault in knowing just what it is you're running into. Netrunner is a game of knowledge, and this is one of two cards that simply removes the uncertainty of an action completely. There's a lot of power in that. — Shannon.L 21 May 2015
As a player that has a hard time with jinteki I have had my life saved by this several times — tsuruki23 2 Jun 2015
4

As with Priority Requisiton, I used to think the pair on the card were talking amongst themselves about the good old days. Now it's obvious they were talking about you and your young, little newbie self who needs to know every face down card before making a move.

"It's not your fault," the card says, "it's a scary world out there, full of nasty traps, angry admin staff and robots that want to sponk you in the brain. Who wouldn't wouldn't be scared? Smart, that's what you're being, so smart! Just take your time...Now, how about 2 instead..? No? Well that's ok, we'll just move on to solid foods later....What's in that server, you ask? Oh just another PAD campaign, again. But well done for making sure! You're so cute when you're cautious (pat pat)."

That's not to say that there aren't moments for it to shine when you become one of them m4d pr0, run with a capital 'R' hacking types.

So it's not a bad card by any means, it's just one that is easy to use in a less than optimal way when you start out, and sadly by the time you have figured out some nice ways to use it, you'll probably have replaced it with something more focused and effective.

(Escalation era)
Tirranek 587
Wait, can expose be used on the top card of R&D? That changes so much if true. Can it also reveal a card from HQ? — stringtheory 6 Oct 2016
Expose effects can only target installed cards, so no, the top card of R&D and cards in the Corp's hand cannot be exposed. — the_nacho 6 Oct 2016
Ah my mistake! I'll correct that. — Tirranek 7 Oct 2016

I feel like this card would have been alot more effective and seen more use if it's text read: "gain 2 credits AND expose a card". As it is, the 2 credit gain is paltry conversion of clicks to credits, once you account for the click to draw infiltration, and the click to play it. And a single time use card exposire can be potent in certain situations, but is rarely game winning. Just my 2 creds worth of opinion....